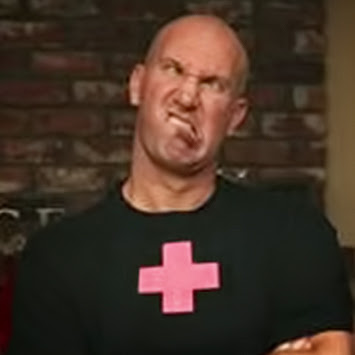 I informed Garrett that an exploration of the couple’s early “wild” years together would be included in the third episode of my documentary, ‘The Devil and Shelley Lubben,’ and he said something that startled me:
“I was a great drug dealer,” Lubben bragged, “and now I’m a great salesman.”
As The Monkees once reminded the world, that was then and this is now; great salesman or not, Garrett Lubben’s online LinkedIn profile now confirms reports that, in October 2012, Lubben was ‘let go’ by his long-time employer, and has been unemployed since.
Garrett had worked in medical device sales for Boston Scientific since late 2003, and last year he had boasted to a reporter that the couple was psyched about the European vacation they’d be taking as a result of Garrett being a top salesman. God had blessed them, the Lubbens proclaimed, for being faithful and dedicated servants who do His good work. It was with palpable pride that these flashy Champions for Christ displayed the indicia of what Joel Osteen and proponents of the Prosperity Gospel would call “favor” with the Lord — including jewelry, matching ‘his and hers’ SUVs, and a $480,000 home in Bakersfield with all new furnishings. In photo after photo, life’s finer fripperies sat well upon them.

Here is a snapshot of Boston Scientific's share price since the firing of Garrett Lubben: 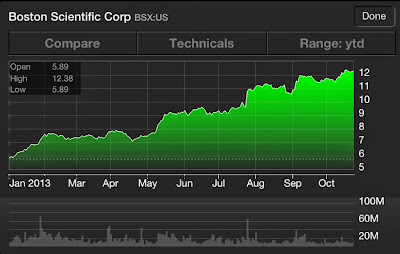 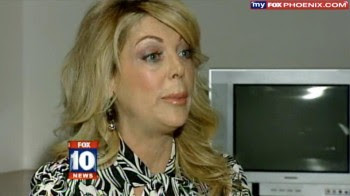 Later that same momentous July, Boston Scientific, which had been struggling since its acquisition of heart stent manufacturer Guidant Corp in 2006, announced a round of job cuts. The timing could not have been worse, but ultimately the Lubbens surely breathed a sigh of relief when, after the corporate axe fell, Garrett still retained his job, as well as his six-figure salary. Somebody up there liked them after all.
Then August brought truly indigestible news: Shelley’s benefactor, Michael Weinstein of AIDS Healthcare Foundation (AHF), had kicked her and Pink Cross Foundation, the anti-porn group she and Garrett had founded in 2008, to the curb with a thud. Since joining up with AHF’s anti-porn crusade in 2009, Shelley’s endorsement by Weinstein’s well-financed organization had resulted in a boost to her credibility and ability to draw donors’ attention to her organization. Under Weinstein’s tutelage, wild-eyed Shelley almost passed for a reasonable spokesman for health and safety.
But Lubben’s disastrous appearance at a debate on pornography at Cambridge University in February 2011 (after which, according to Pink Cross insiders, Lubben spent time in a psychiatric ward), marked the beginning of a months-long downward spiral of PR missteps and what Weinstein termed “outrageous behavior” by Mrs. Lubben — such as being photographed having her breast autographed by porn star Ron Jeremy outside the toilet of a Burbank bar (after bidding $600 for a “date” with him) in April 2011, and being videotaped that summer praying in her backyard with a prophet’s 8-foot staff pointed at the sky.
Then, Shelley was publicly humiliated at a June 7th Cal/OSHA meeting in Los Angeles. Scores of adult performers, the group Lubben had long claimed as her constituency, turned up to shout her down and deride her, casting doubt upon all the claims and representations of AHF, which had endorsed her participation.
Weinstein recognized that Shelley was “a lightning rod for criticism,” and by August she had become more trouble than she was worth. Losing this association with AHF meant no more national press attention for Shelley and Pink Cross. It was a devastating blow, because the Lubbens’ Pink Cross fundraising efforts were dependent upon the broadest possible exposure.
By September 2011, things started to get even worse: the sole porn star in “recovery” at the Lubben house, Michelle Avanti, fled Bakersfield, and, in a video interview released the following month, charged abuse, exploitation and neglect by Shelley Lubben, whom she called a “con artist,” “manipulator” and “addict.” In the wake of the resultant negative publicity — compounded by a devastating YouTube video produced by Shelley’s own brother, posted on October 10th — and with no one actually “recovering” at their old house, the Lubbens decided to sell the property. Although they’d paid $300,000 for the house in 2004, and performed many thousands of dollars in renovations and improvements, the Lubbens listed the house for the bargain price of $189,000 on October 19th.
The house eventually sold in March 2012, and in April, Mrs. Lubben took to Facebook to attack her critics, whom she described as ‘enemies”:
“Some of you have been writing me to ask me if what my enemies say about me is true,” Shelley wrote. “I would lovingly advise you to look at the FRUIT. One thing my enemies have in common is that they have accomplished very little in life… Most if not all do not have a degree or even a steady job…. Examine the fruit my friends and you will know the truth!”
“Look at the FRUIT!” she commanded. “My enemies can’t hold a candle to all the Christ has done in my life.”
In other words, the proof that she was blessed, honorable and truthful, while her ‘enemies’ were accursed, evil and dishonest, lay in the fact that the Lubbens were prosperous.
Then, in August of this year, as if by karmic clockwork, Garrett’s employer announced a second round of cuts and restructuring, specifically targeting Boston Scientific’s cardiac divisions. Now, surely the Lord knows that the mortgage is due; does this turn of events mean that he has rescinded his blessing? 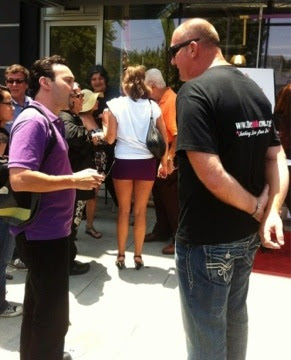 Does Garrett the breadwinner’s lack of employment explain why it took the Lubbens’ a month and a half to get the Pink Cross website repaired after it became infected with viruses?
CODA
At the end of June 2011, on the cusp of that glorious month when everything seemed to be going so right for the house of Lubben, outgoing Pink Cross team member April Garris was at an all-time low. “Not only was I financially destitute, getting kicked out of my home and about to lose my car,” she recalls at her blog, The Healing Diaries, “but I was struggling with severe depression, and the worst part – I was completely alone. Eight months earlier, I had packed up everything and basically dropped my whole life to move out to Bakersfield to work full-time for Pink Cross Foundation. By the end of my 8 months in Bakersfield, I was confused, hurt, and spiritually exhausted. What I was expecting to be an amazing experience serving God turned out to be a time of great distress, full of broken promises, spiritual confusion, heartache, and loneliness that I never would have imagined could be possible in ministry.”
Garris remembers that whenever she came to the Lubbens with her financial concerns, she would be told that she didn’t have enough faith. Shelley would remind her of “how God had blessed her and Garrett, and cited their great faith as reason for this.” Garrett and Shelley claimed they “were wealthy because they trusted God, and if we would just have faith, all of our needs would be met….”
Have faith, Mrs. Lubben. And when it comes to Garrett Lubben, look at the FRUIT!