In addition to a six year-term in state prison, of which he must serve at least three years, Pauling also must register as a sexual offender for life. 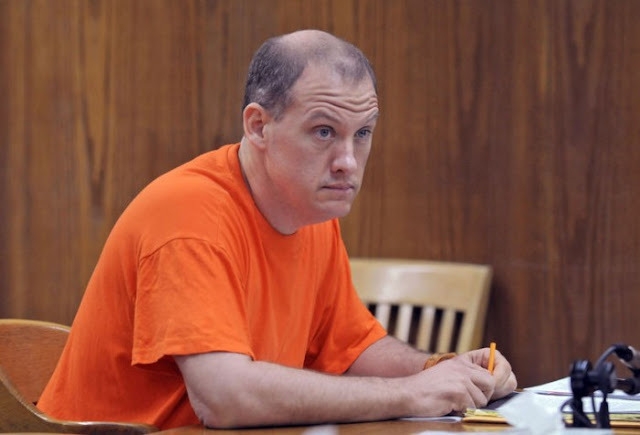 Donny Pauling pleaded no contest Thursday to four felony sex charges involving two minors, a plea deal that would send him to state prison for six years.
The plea marked the end to a dizzying saga of sex crime charges that also implicated the former commander of the Sutter County Jail.

Pauling, 41, acting as his own attorney, admitted to oral copulation and having sexual intercourse with a victim 14 years old in 2012, continuing into 2014. He also admitted to lewd or lascivious behavior with a girl related to former Sutter County sheriff’s Capt. Lewis McElfresh, “motivated by an unnatural or abnormal interest in children,” according to the plea. 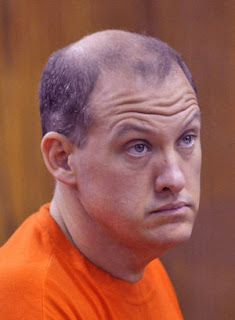 The facts of the plea also stated McElfresh masturbated while watching Pauling commit sex acts with that girl, who was then 16 years old.
Furthermore, Pauling pleaded to a misdemeanor charge of massaging a third victim’s genitals in early 2014. That victim was 16 years old at the time.
Sutter County Superior Court Judge Susan Green set sentencing for Nov. 12.

In addition to six years in state prison, of which he must serve at least three years, Pauling also must register as a sexual offender for life. Pauling also agreed to a period of parole ranging from three years to life following his release from prison. 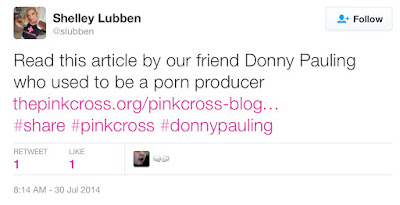 As an associate of Gail Dines and Shelley Lubben, he preached regularly about what the alleges are the detrimental impacts of pornography on girls and women, and families. All three were featured speakers at the Coalition to End Sexual Exploitation 2014 Summit in May of that year.
However the criminal charges of which Pauling has now been convicted indicate that he was a serial molester all the while.

Gail Dines and Donny Pauling in 2014.

Pauling was arrested Dec. 1, 2014 by the Sutter County Sheriff on three felony sex charges, including Unlawful Intercourse (Statutory Rape), after a 16-year-old female told law enforcement that Pauling had ongoing sexual contact with her for the past three years.
In an interview with journalist Meredith J. Graham, Ms. Chopra revealed that the 16-year-old was a relative who had been living with Pauling for several years.

“He was the caretaker of the child—they lived together in Shasta County, then moved to Yuba City [in 2012],” Chopra explained. During that time, she said, Pauling and the girl allegedly had a sexual relationship. She also alleged that he photographed the girl with other young girls in various poses.

According to detectives, the teen had first disclosed Pauling’s actions to both her mother and a friend Thanksgiving week. The Appeal-Democrat reports

She told detectives Pauling had told her that if she ever told officers about the relationship, she should tell him first so he could kill himself. She also said Pauling told her he wasn’t like other child molesters because he loved her.

Pauling first made inappropriate comments to the first victim about her lips and bottom. The comments turned into sexual acts, and Pauling first had sex with the girl in the summer of 2014. She said he used a condom until he had a vasectomy…. The girl told him that Pauling bought her lingerie — which detectives discovered in his bedroom — and photographed her in erotic and sexualized poses. She said Pauling uploaded the photos to Reddit.com. Deputy District Attorney Anu Chopra submitted 10 photos of the girl into evidence. Some of the photos included the girl posing topless, exposing her bottom, and some included other minors.

According to Brokenbrough, the teen told authorities that Donny Pauling had once video-recorded her in the shower, which she only realized after she discovered the hidden device. The detective also testified that there were additional witnesses. 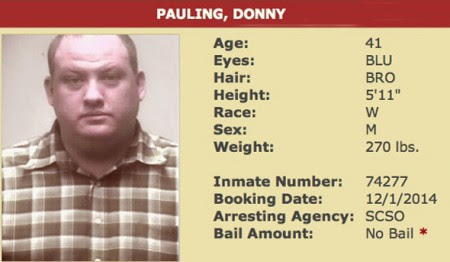 On Dec. 17, Pauling claimed in a jailhouse interview that then-Sutter County Sheriff’s Captain Lewis McElfresh Jr. had urged him to have sex with another 16-year-old girl. Evidence of the second alleged victim was presented to Yuba City police by a man named Chase Hammonds. According to an officer’s declaration, Hammonds confronted McElfresh about the alleged incident, recorded the conversation and provided the recording to a Sutter County sheriff’s lieutenant.

McElfresh has acknowledged the recording's existence, but claims he admitted to nothing on it.
On Dec. 18, the Appeal-Democrat reported, the Sutter County District Attorney charged McElfresh with five felonies: two counts of felony child molestation, willful child cruelty, burglary and misdemeanor charges of annoying or molesting a minor and indecent exposure. McElfresh is accused of masturbating while, allegedly, watching a minor being sexually violated by Pauling. McElfresh, is being held with bail set at $5 million.
According to statements made in open court on Jan 14, additional victims were identified in the criminal investigation of Pauling.
A second criminal case was filed against Pauling on Jan. 28. According to the Appeal-Democrat

Chopra filed a nine-count criminal complaint naming Pauling in [connection with McElfresh]. The charges alleged four incidents of unlawful sex with a minor…. Investigators are in the process of interviewing eight minor girls as potential victims of Pauling, according to a declaration filed by Sutter County sheriff’s Lt. James Casner. Some of those girls live in Glenn and Butte counties. Chopra said she will ask for a bail enhancement for Pauling, which, if granted, would increase his bail from $500,000 to $1 million.

The second criminal complaint against the anti-pornography activist includes eight sex crime-related counts — including several instances of sexual intercourse; oral copulation and penetration with a foreign object on a minor — as well as one charge of first-degree burglary.
On May 19, Judge Aronson heard testimony for two of the cases from law enforcement officers who conducted or examined interviews with the minor victims. After evidence was submitted to the court, Aronson ordered a trial for Pauling.
According to a published report:

Immediately after Donny Pauling had sex with a 16-year-old girl, he threatened to post nude photos of her online, kill her boyfriend and hurt her family if she told anyone, a sheriff’s detective testified Tuesday.
The girl later allegedly told Lewis McElfresh, then-Sutter County sheriff’s captain, she wanted to have sex with Pauling. McElfresh then watched the two have sex as he masturbated, an officer testified.
…
Testimony detailed the way Pauling approached the girls, who were friends with his minor relative, with whom he is also accused of having an ongoing sexual relationship.
During separate interviews, the girls told officers of Pauling’s actions, which included nude massages. One girl said she attended class at Yuba College with Pauling, he drove her home, and while they were studying together, he gave her root beer that made her feel weak and dizzy.
She alleged he took off her clothes and had sex with her, told her he took nude photos of her and threatened her.
She reported he had sex with her three more times.

McElfresh has pleaded not guilty to felony charges for his alleged role in one of the incidents.
McElfresh, like Pauling, is calling into question the credibility of a witness against him. McElfresh’s $5 million bail was based in part on the affidavit of Yuba City police Sgt. Brain Baker. According to the Appeal-Democrat, McElfresh’s attorney, Jesse Santana states in a Notice of Motion that he believes Baker has a history of fabricating probable cause.
On September 24, the Appeal-Democrat reported:

Donny Pauling won his first motion representing himself Thursday when a Sutter County judge agreed to postpone his trial to give him more time to prepare.
Judge Susan E. Green pushed back the Sept. 29 trial date to Dec. 1.

The possibility of a plea deal was also discussed, and Pauling rejected a no contest plea requiring a seven-year prison sentence. However, the two sides indicated that they planned to continue plea negotiations.
At his felony pre-trial conference, Thursday, Oct. 15, Pauling took the modified 6-year plea deal.
Lewis McElfresh, although tied to Pauling’s case, is being tried separately.
McElfresh is charged with five felonies, and most of the charges involve the single incident with Pauling.
Although Pauling’s plea did not include any stipulations to testify in McElfresh’s trial, that doesn’t mean Pauling won’t testify, Chopra said.
McElfresh is scheduled for a felony pretrial conference on Nov. 9.

According to a report on the sentencing hearing in the Appeal-Democrat:


The mother of one victim wrote a letter to the court, saying she could not face Pauling without having a physical reaction. The letter was read aloud by Stephanie Cooper with Victim Services.
The victim of the ongoing sexual abuse has been in and out of the hospital with intense stomach pains, which doctors say is stress-related, the letter said. Some days the girl cries and screams all day.
"I doubt if in the future she will ever be able to know what a normal relationship with a man is like," Cooper read....
The second victim confronted Pauling directly with a statement to the court.

"I've been called many things in my life," the girl said. "Yet, the most imprinting titles I was given were a liar and the victim."

She said she's run away from homes, slept under bridges, lost her privacy and her self-esteem.

"This past year I've been interrogated, I've been the gossip, I've been moved from foster home to foster home, I've been rejected and abandoned. Yet, when this all began, I never felt like a victim. It wasn't until his statement that he made accusing me of being a liar, the comments made about me on Facebook, news articles and as I walked by. That's when it all sunk in," she said.

Her helplessness was answered, she said, when she was placed in a foster home with a loving family. With their help and the help of her boyfriend, she is discovering her "strength and ability to recover and the power of forgiveness."

"I will do good things in my life, and that's because beyond fear lies freedom," she said.

McElfresh, his bail dramatically reduced, was released on bond in September 2015. He is due back in court April 15, 2016 for a trial readiness conference.

UPDATE (April 15): McElfresh's trial has been postponed until November, apparently after the deputy district attorney assigned to the case was placed on administrative leave.

UPDATE (Nov 11): Although accused of being present while a 16 year old was raped by pornographer-turned-pastor Donny Pauling, in 2014, Lewis McElfresh is enrolling in sex offender counseling and will be on probation for five years. He will serve no jail time and will not have to register as a sex offender after pleading 'no contest' to felony child endangerment. Visiting judge James Garbolino handed down the sentence. The victim, 16 at the time of the incident, also requested and was granted a ten year restraining order against McElfresh, who was in Sutter County court for the sentencing but has relocated to West Virginia. 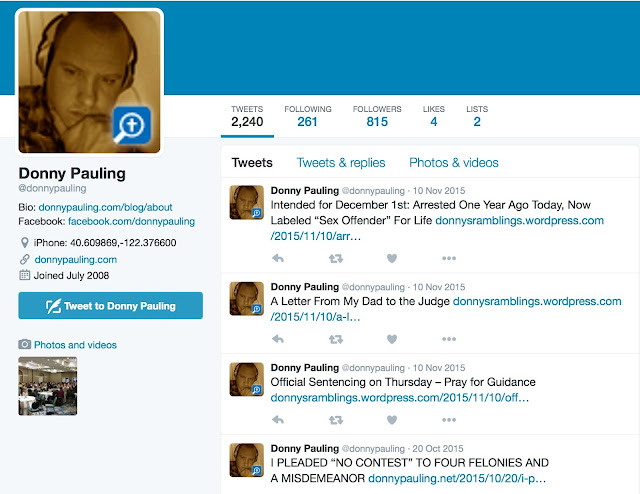 Posted by Michael Whiteacre at 1:00 PM No comments: Links to this post