Shelley Lubben's boyfriend will likely be unable to plea bargain

Valley was arrested Tuesday Nov. 7 after he allegedly struck and killed a 51-year old cyclist less than 2 miles from the Lubben ranch property.

Witnesses say Joe Valley was already intoxicated when he arrived at a local bar, and was cut off from ordering more alcohol before he allegedly ran down the cyclist driving Shelley Lubben's car and fled the scene.

The hit-and-run collision occurred at Balch Park Road and Battle Mountain Road in Springville at around 4:40 p.m. Tuesday.

According to the California Highway Patrol, 27-year-old Valley hit the cyclist while driving a silver 2005 Chrysler PT Cruiser with a convertible top. A witness at the scene saw Valley take off "up Balch Park Road to his house" after the collision. The cyclist died at the scene.

A United Parcel Service driver had discovered Mr. Muguia in the road. After witnesses reported seeing a PT Cruiser with a broken windshield and significant front end damage, the UPS driver directed law enforcement to a nearby house where a PT Cruiser was normally parked: the Lubben Ranch.

Highway Patrol officers discovered Valley on the ranch property, and he explained that the damage too the vehicle was the result of hitting an animal.


The CHP officers arrested Valley and took him to jail. But because Lubben had already left, they were initially unable to interview her.

Valley, who has a prior criminal record, was booked later that night, and held on $100,000 bail.

District Attorney Tim Ward later filed criminal charges against Valley, upping his bail to $145,000. Joe Valley is being held at the Adult Pre-Trial Facility in Visalia.

The charges were followed by Ward's announcement of a $153,620 California Office of Traffic Safety grant. The grant will be used to help prosecute cases of drunken and impaired drivers.


"No one should be injured or lose their lives due to the reckless and risky behavior of a drunk driver," said Ward. "We look forward to continuing our focus on prosecuting this dangerous and avoidable crime." 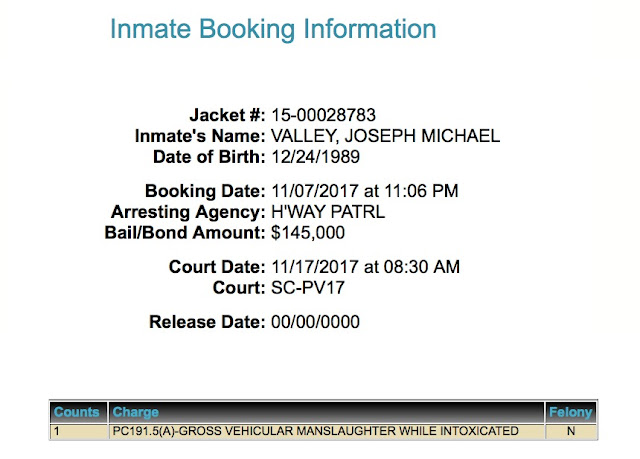 The criminal complaint filed Nov. 9 by the Tulare County district attorney charges Valley with felony hit-and-run driving resulting in death or serious bodily injury to another person, as well as the 'serious felony' gross vehicular manslaughter while intoxicated.

1192.7. (b) Plea bargaining in any case in which the indictment or information charges any serious felony, ... or any offense of driving while under the influence of alcohol, drugs, narcotics, or any other intoxicating substance, or any combination thereof, is prohibited....

In addition, the complaint against Valley states that "the People hereby put the defendant on notice that the aggravated sentence may be sought in this case."

California's “three strikes” law significantly increases the prison sentences of persons convicted of a felony who have been previously convicted of two or more violent crimes or serious felonies. The law also limits the ability of these offenders to receive a punishment other than a life sentence.

Valley does indeed have a prior criminal record.

Lubben and Valley met when her husband hired him to work at the Springville property in the spring of 2015. Shelley began an affair with Valley, and her husband later filed for divorce.

On Christmas eve 2015, Lubben phoned 911 and reported that Valley had sexually assaulted and battered her. She later recanted the sexual assault claim, but Valley served 90 days for domestic battery in Porterville. 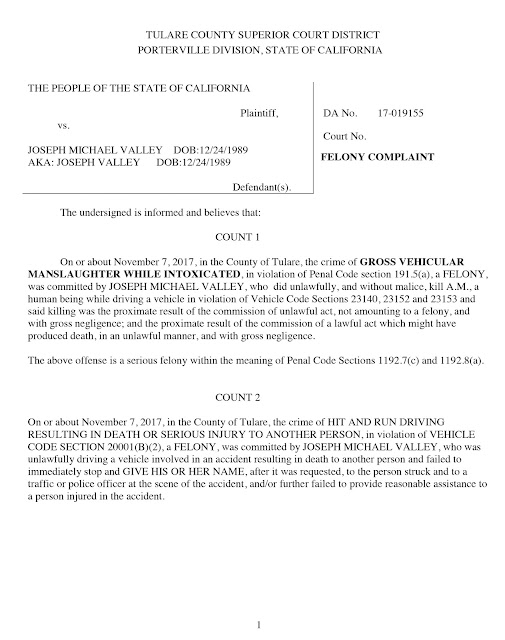 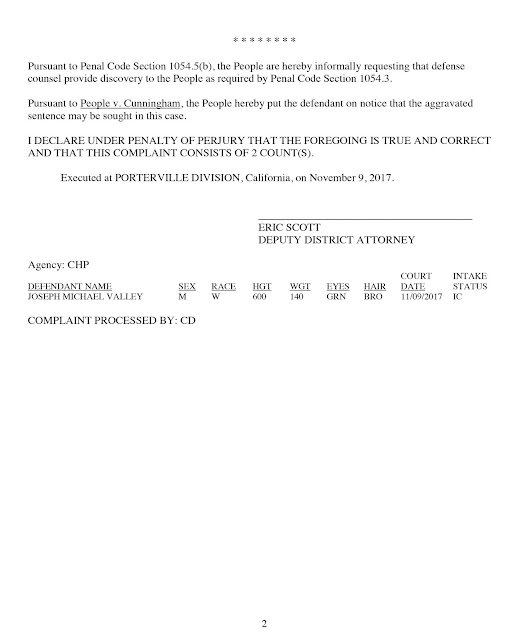 Joe Valley appeared in court Nov. 17 for a preliminary hearing setting. His next court date will be December 7, one month after the car he drove struck and killed the cyclist on Balch Park Road.

Posted by Michael Whiteacre at 2:48 PM