Shelley Lubben Cause of Death Update

There is an update in the matter of Shelley Lubben's cause of death in the early morning of Feb. 9, 2019.

I have not yet received the Tulare County Coroner's report, which details Ms. Lubben's overall physical health, blood alcohol level, and any other substances that were present in her system at the time of her passing, but the direct cause of death is cardiovascular failure via pulmonary embolism, causing cardiac arrest.

And contrary to the claims of conspiracy theorists, the coroner has determined that her death was neither a suicide nor a homicide.

A pulmonary embolism (PE) is a blockage in the pulmonary artery, which supplies the blood to the lungs. PE is a general term referencing a series of diseases and clinical syndromes which are caused by various emboli (endogenous and exogenous) blocking the pulmonary arterial system, whose clinical symptoms are various.

Her family and associates say that Shelley Lubben had no known heart or lung problems. She was receiving medical care but had not been prescribed any medication to treat cardiovascular issues. She did suffer from gastric issues, and had been prescribed Nexium (esomeprazole magnesium), a proton pump inhibitor that blocks acid production in the stomach and is used to treat stomach and duodenal ulcers, gastroesophageal reflux disease.

Shelley Lubben was only 50 years old; she was sleeping, not exerting herself -- what might have caused her sudden death?

Although her cause of death has been determined to have not been an overdose, as was originally stated by the 9-1-1 responders, long-time drug and/or alcohol abuse, and withdrawal, are likely elements.

Shelley had been hospitalized days earlier (on the night of Feb. 4) suffering from withdrawal.

Chronic alcohol abuse can cause alcoholic cardiomyopathy (ACM), which can lead to congestive heart failure or pulmonary embolism.

ACM is a kind of disease that has typical hemodynamic change, symptoms, signs and imaging findings of dilated cardiomyopathy (DCM), but its symptoms can be released or cured after 4-8 weeks of giving up drinking. If Shelley Lubben had stopped drinking, it was for far less time than that -- less than one week.

And alcohol abuse is also linked to DCM.

It should also be noted that pulmonary complications due to drug abuse are common.

Posted by Michael Whiteacre at 11:03 PM No comments: Links to this post

Tulare County, CA -- Shelley Lubben, the controversial anti-porn crusader and founder of the Pink Cross Foundation was discovered dead Saturday morning, Feb. 9, of what 9-1-1 responders have called an apparent overdose. She was 50 years old.

Tulare County Sheriffs notified her parents via telephone shortly after arriving on the scene.

Mrs. Lubben had long claimed to be sober since the year 2000, saying that she had been miraculously cured of all her physical and mental infirmities after turning to God.

"He has completely restored me. I am totally free from drugs, alcohol, bad memories, mental illness, sexual trauma, guilt from the past, and everything from the old life. He even healed me from the non-curable disease herpes,” Shelley once proclaimed.

In reality, after falling off the wagon in 2005 and surrounding herself with enablers, she spiraled into a world of alcohol and prescription drug abuse which ravaged her body and mind.

On January 24, Ms. Lubben placed her 1974 Sierra Cabin Cruiser up for sale on craigslist, asking $3,500. In the description she noted, "There has been a lot of work on the boat and it's actually worth more but need to sell due to illness so am asking a much lower price than what I paid." 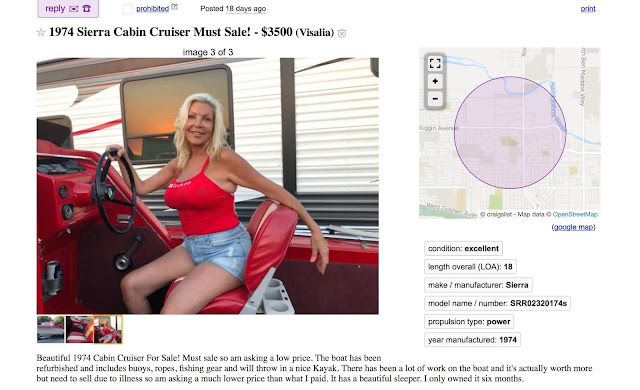 According to statements made in open court in Vista, Calif. on February 5, on the night previous Ms. Lubben was admitted to a hospital in San Diego for treatment of alcohol withdrawal. She returned to Tulare County after being discharged.

At the time of her death, Lubben resided in a Lemon Cove, Calif. trailer park. It was there that she was found unresponsive by a male friend who had thought she was sleeping.

He phoned 911 and began CPR, but when responders arrived they informed him that it was too late. Shelley Lubben was pronounced dead on the scene.

After examining Shelley's remains, and inspecting the scene, responders informed the friend, and later told Shelley's father and brother, that she had passed due to an apparent overdose. The Tulare County coroner will have the final word regarding the official cause of death.

There were three active restraining orders against Ms. Lubben at the time of her passing, a warrant was expected to be issued for her arrest in a criminal threat case, she was being sued by creditors, and had been named in a wrongful death action.

Shelley Lubben is survived by her parents; a younger sister and brother; two daughters; a grandson; and a boyfriend currently serving a California prison term for DUI hit-and-run Vehicular Manslaughter.

Shelley Lubben's remains were taken to the Evans Miller Guinn Exeter Chapel. Ms. Lubben is to be cremated next week, and her ashes scattered. No obituary has been posted to the funeral home's website, and, at the request of her surviving daughters, no services are planned.

Please join me in praying that Shelley Lubben can now find the peace that eluded her in life, and that her victims can likewise find peace and relief.


Posted by Michael Whiteacre at 3:58 PM 90 comments: Links to this post